Let’s stand together against desertification 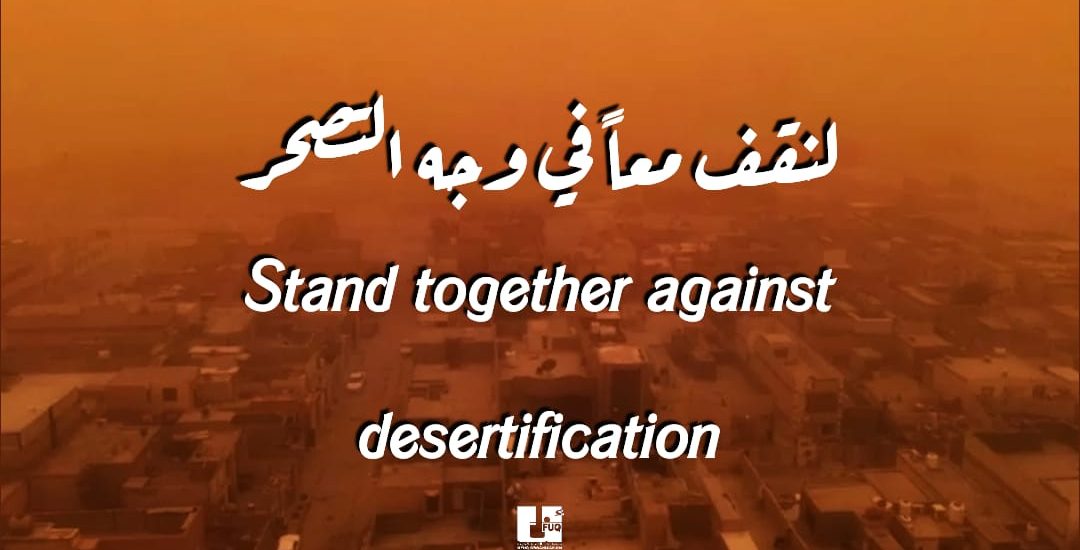 Call for an action

Iraq has been facing worrisome environmental risks for decades, which have increased dramatically in recent years. Challenges posed by Climate Changes, such as rising temperatures, less rain, water scarcity, the salinity of land, an increase in sand and dust storms, and the resulting disasters. The resulting human disasters are related to food shortages, internal and external migrations, economic and security decline, and many other problems associated with environmental disasters resulting from these challenges. The Ministry of Agriculture stated that the cultivated area for the year 2021 is less than 3 million dunams, compared to about 15 million dunums in 2019. The Ministry of Water Resources stated that: “the available water storage for 2022 is much less than what we have last year by about 50 percent due to the lack of rain, and the lack of water that we receive from neighboring countries”, and the wasteful consumption of groundwater. It’s not a secret, nor is it difficult for everyone to notice, that the symptoms of serious drought began to appear rapidly, especially the decrease in the water level of rivers, the drying up of water bodies, the decrease in cultivated areas, and the increase in the frequency of sandstorms in a worrying manner. in the meantime, state institutions are not reacting in proportion to the magnitude of the risks. Iraq did not show an appropriate response at the governmental level, in reaching a fair sharing of freshwater resources with the upstream countries that share the waters of the Tigris and Euphrates and their branches and tributaries. Iraq has not exerted sufficient pressure to stop the building of unjust dams, or to limit the irrigation projects that harm Iraq’s water share. Also failed to implement a tight internal water policy that limits the waste of water. The Iraqi parliament also did not have a clear role in filling the legislative deficiency that guarantees a healthy natural environment and fair use of water resources, Since Iraq has not yet legislated the Water Resources Policy Law, which Article 114 of the Constitution referred to in paragraph VII. It’s oversight role was no better. For all of that, and because of our belief that civil society is one of our lines of defense for the human being and his existence, we believe that all activists and civil society institutions, organizations and networks, unions and associations, and individuals, must do our part to pressure state institutions to play their role, address the crisis before it escalates, and assume our responsibilities before society, investing our capabilities, resources, and expertise. From this point of view, and for us to have a move commensurate with the danger that threatens all of our lives, but rather threatens our existence and the existence of this land, we call on you all, our colleagues, to take all necessary measures to direct all our capabilities towards putting pressure on the Iraqi state institutions and the international community, to take all necessary measures To reduce the phenomenon of climate changes and combat drought and desertification in Iraq. We invite all of you to join us to achieve our goal of protecting our presence on this earth and reducing environmental, economic, and social risks. In this regard, we suggest that all civil society institutions build urgent plans to have a role in this battle. By uniting our forces, and preparing a common vision and plan, to take steps that achieve a rapid and vital impact in reversing the accelerating pace of climate change in Iraq. Armed with the belief in our ability to achieve the desired results, as we have took our responsibilities in the face of terrorism, we must do our part once again, with the same determination.

For coordination email us: