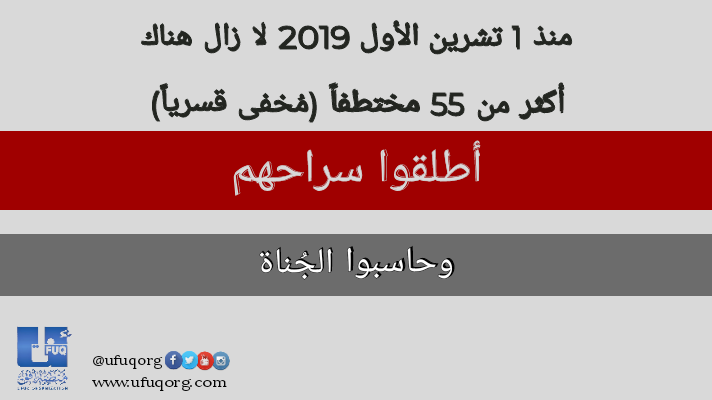 On the anniversary of the October demonstrations that occurred in the cities of Iraq on the first of October of last year, and their consequences have continued until now.
There are so far more than 55 forcibly disappeared activists and participants in the protests. The Iraqi state institutions have not revealed their status, nor have the institutions’ investigations found who was behind these crimes.

In 2010, Iraq fully joined the “International Convention for the Protection of All Persons from Enforced Disappearance” based on Resolution No. (16), published in Iraqi Al-Waqi’a newspaper | Issue Number: 4158 | Date: 01/12/2010 | Page 1.
The Convention stipulates in Article (1) Second that:
2. No exceptional circumstances whatsoever, whether a state of war or a threat of war, internal political instability, or any other public emergency, may be invoked as a justification for enforced disappearance.

The convention also states in Article 6:
1. Each State Party shall take the necessary measures to hold criminally responsible at least:

(a) Any person who commits, orders, solicits, or induces the commission of, attempts to commit, is an accomplice to or participates in an enforced disappearance;

(i) Knew, or consciously disregarded information which clearly indicated, that subordinates under his or her effective authority and control were committing or about to commit a crime of enforced disappearance;

(ii) Exercised effective responsibility for and control over activities which were concerned with the crime of enforced disappearance; and

(iii) Failed to take all necessary and reasonable measures within his or her power to prevent or repress the commission of enforced disappearance or to submit the matter to the competent authorities for investigation and prosecution;

2. No order or instruction from any public authority, civilian, military or other, maybe invoked to justify an offense of enforced disappearance. “

Thus, the competent institutions bear the legal responsibility to discover the status of the disappeared and to achieve justice for the perpetrator of these crimes, whoever ordered them, and whoever colluded with the perpetrators to carry them out, whoever they are.
We urge the legislative authorities to work on an Iraqi law that limits enforced disappearance, based on articles 15 and 37 of the Iraqi constitution, to stop these crimes once and for all.